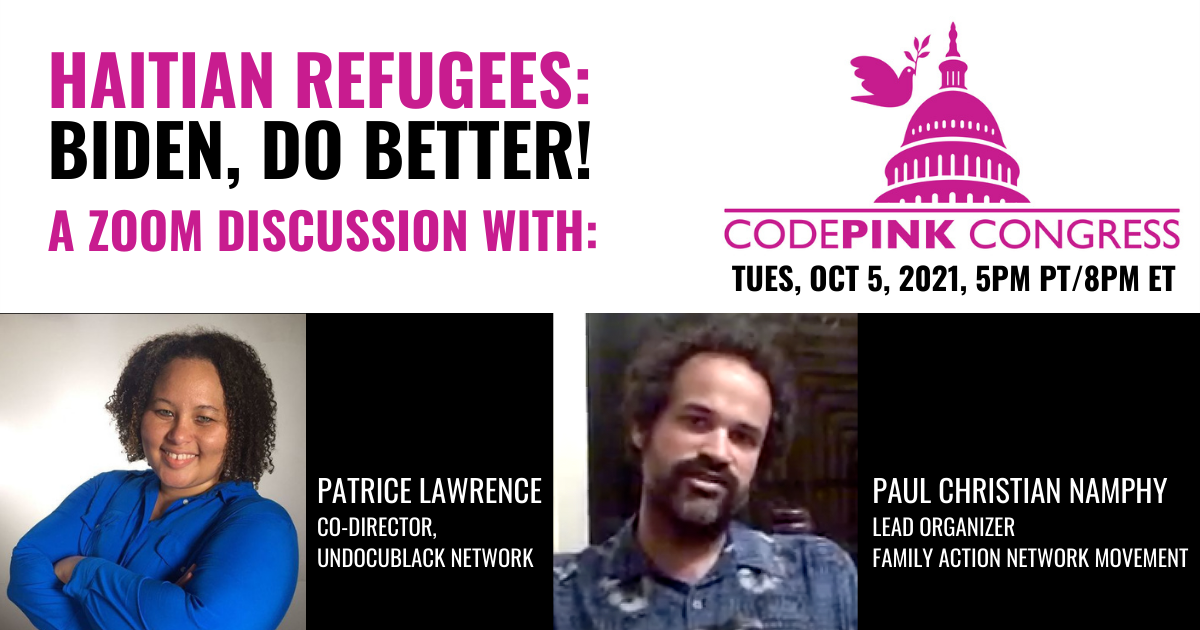 On Tuesday, October 5, join CODEPINK Congress as we urge the Biden administration to suspend the use of Title 42 and allow Haitian refugees to apply for political asylum.

The Biden administration continues to deport thousands of Haitian refugees fleeing political collapse, street violence, and earthquake disruption. While the White House denies Haitians the right to asylum, up to 14,000 Haitian refugees are facing a humanitarian crisis - recently, U.S. envoy to Haiti Daniel Foote resigned on the basis of the “inhumane” mass deportations. Under Biden, the Department of Homeland Security has continued to rely on obscure public health law Title 42 to deny Haitians entry into the United States because of the COVID pandemic.

Patrice Lawrence, originally from Jamaica, is the Co-Director for the UndocuBlack Network, a powerful multigenerational community of currently and formerly undocumented Black people fighting to not only survive, but thrive. Patrice has been on the forefront of exposing the plight of Haitians in makeshift camps in Del Rio, Texas, and pressuring the Biden Administration to allow for an orderly asylum process as stipulated by law instead of inhumane mass expulsions of vulnerable people.

Paul Christian Namphy is the lead organizer of Miami-based Haitian group Family Action Network Movement (FANM). For the past three years, FANM has successfully spearheaded the Temporary Protected Status National Campaign for Haitians, and has been leading delegations to Washington D.C. to advocate for a permanent solution with a path to citizenship. He recently returned from Del Rio, Texas, where he was advocating on behalf of Haitian migrants.