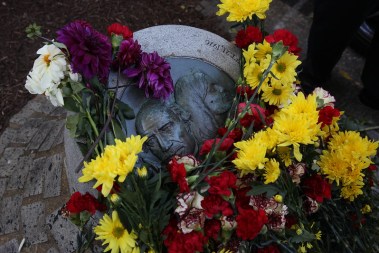 Join us to remember Orlando Letelier and Ronni Karpen Moffitt, who were assassinated on this site in 1976 by agents of the Pinochet dictatorship. Arrive @ 9AM to witness a cleansing by Carla Garcia, Garifuna Awardee, of Sheridan Circle

On September 21, 1976, agents of the Pinochet dictatorship in Chile detonated a car bomb on Washington, DC’s Embassy Row, taking the lives but not the memory of Institute for Policy Studies colleagues Orlando Letelier and Ronni Karpen Moffitt.

Letelier, a former Chilean ambassador to the United States, had become one of the most outspoken critics of the Pinochet regime. Moffitt was a 25-year-old IPS development associate. For more than four decades, the pursuit of justice for their murders has been a symbol of hope for victims of tyranny everywhere.

Every year, human rights activists, friends, family, and colleagues gather in remembrance of Letelier and Moffitt and to reflect on the ongoing struggle for human rights around the world.

This program will take place in person, outdoors at the site of the assassination and end with a laying of flowers on the Letelier-Moffitt memorial across the street from Sheridan Circle.